Welcome to the fourth character spotlight featuring Piers Fallcray from Game Trays Lab’s upcoming game Forsaken, which is coming to Kickstarter in Q3 2022! Our last character spotlight introduced us to Sol Syrium Quell: a colorful reality TV star aiming to film his magnum opus. This week’s entry takes us back home to Thyrria…

A massive faction called the Empyriad arrived on Thyrria hundreds of standard cycles ago, effectively starting an interstellar gold rush to mine the new world’s abundant resources. Then, a decade ago, the Empyriad determined that Thyrria had surpassed the tipping point of ecological collapse and left the dying world–and their workforce–behind.

Among that workforce were the Fallcrays, a family of surveyors and geologists who knew early on to start saving what they could for the disaster ahead. Despite this advantage, transport off-world became prohibitively rare and expensive. They could only afford to send their young son, Piers, back to the core worlds in hopes of finding a better life.

In his years away, Piers trained with and fought for freedom fighters in four systems, pushing back the Empyriad’s advance in hopes of serving some degree of retribution for his lost home. During a raid on an Empyriad facility, he came across a newborn Terraforming Seed—a self-replicating biomimetic device that can shape a planet to be habitable. Formulating a plan, he took the priceless Seed for himself and spent what he had to return home to Thyrria.

This Terraforming Seed can change Thyrria’s future forever, but Piers will never be able to plant the device near the planet’s core without help. What’s worse, restoring Thyrria could be an invitation for the Empyriad to return. Getting back home was only the first step. Rebuilding a home worth living in will be something else entirely.

Through Time and Space

During his time abroad, Piers received tactical training from several different cultures and had access to their technologies. His signature gear card is his Fractal Jack, which allows him to temporarily displace the flow of time around him and move quickly in short bursts. 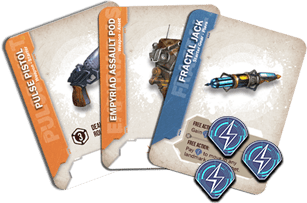 In play, this is represented by Piers’s mastery of boost tokens. Boosts can be spent to take a move as a free action, meaning that you’re allowed greater flexibility on the map as you run around pursuing your goals. The Fractal Jack can be used to gain a boost token or to spend a boost to move a much greater distance.

Meanwhile, Piers’s talent allows him to hold more boost tokens than any other character—5 instead of the usual 3—and that extra storage comes in handy when his legend loop provides a steady flow of extra tokens. His ability to displace time also gives him the ability to spend boosts and roll additional dice during challenges or combat.

As a result. Piers is the most mobile character in the game by far. Will you use his powers to doggedly pursue your objectives with a single mind, or to have it all and be everywhere at once?

Next up in our Character Spotlight Series is Xota Xoran, the only other human character in our base game, a fixer, and drifter looking to piece together whatever favors it takes for her to get off of Thyrria and make her way home. Make sure to subscribe to our Kickstarter pre-launch page to be notified when we launch!