Welcome to the third character spotlight, featuring Sol Syrium Quell from Game Trayz Lab’s upcoming game Forsaken, which is coming to Kickstarter on September 6th! Our last character spotlight introduced us to Grash: an invincible gladiator visiting Thyrria to be reminded of what fear feels like.

A Different Kind of Celebrity

I’m Sol Syrium Quell, and I’m gonna show you what it takes to survive some of the most dangerous places in the galaxy. From the diamond cliffs of Junai to the acid pits of Andalore, the only things between me and certain death are my wits and my incredible knack for adventure. This… is Breaking Atmo. 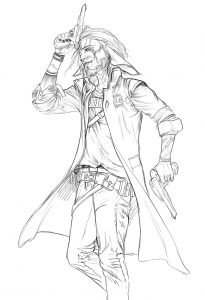 reality show for more than ten standard cycles, but he wasn’t always an interstellar celebrity. He started his career as a child actor on the Llvar homeworld of Quell, always finding enough work to stay afloat but never enough to hit the big time.

His breakthrough was pure luck. A local broadcast stream happened to record him stopping a robbery on the streets of Quell. Between Sol’s quick-thinking and his high cheekbones, the core worlds had found their new darling–the clip became the first on the extranet to be viewed over a trillion times.

Rather than let his fleeting moment of fame slip him by, Sol connected with a producer who was more than happy to capitalize on the hype. Together, they dreamed up Breaking Atmo–an augmented reality series where Sol visits a new world in the outer systems every week and guides the viewer through a handful of staged scenes that Sol “narrowly” survives.

The adventure show was a tremendous success, drawing deeply on Sol’s natural flair for the dramatic and the core worlds’ romantic fascination with the outer systems. But ten cycles later, Sol was getting older and his imitators kept getting younger. The monster-of-the-week approach just wasn’t pulling in the same numbers. Stricken by  inspiration, Sol pitched his producers on a trip to Thyrria: a world so far beyond the edge of civilization and so shrouded in rumor and excitement that the viewers would not be able to tear themselves away.

When Sol and his crew arrived on Thyrria, they found the perfect backdrop for thrilling stunts and action. But soon it became clear that they would find much more than good footage on this most savage of worlds. 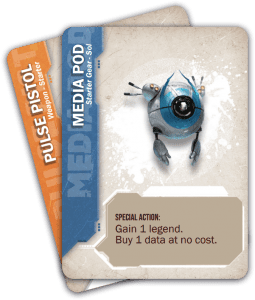 Sol might be a pushover, but his crew has always gotten him through the roughest times. His greatest advantage is his budget–not only does Sol begin the game with an absolutely decadent suite of resources, his legend loop also features options to gain some quick scrap. These resources can be invested in the very best gear and weapons that money has to offer.

But there’s more to making an action series than just gear and weapons. Sol’s legend loop also features spaces where he can pay his production crew to make things happen–whether that’s rapidly moving across the map, or running errands at Thyrria’s locations, or even just doing Sol’s jobs for him.

To cap it all off, Sol’s signature gear–his trusty Media Pod–allows him to advance along his legend loop more easily than most other characters. It helps when everyone in the galaxy already knows your name–and every space you move, you’ll have the option to collect your salary or pay your crew to gain an advantage.

Next up in our Character Spotlight Series is Piers Fallcray, a sojourner that’s returned home to Thyrria with a spark of hope and a dream to restore the planet as a garden world. Stay tuned for more updates, and make sure to visit our Kickstarter pre-launch page so we can notify you on launch!