Welcome to the sixth and final character spotlight featuring Xota Xoran from Game Trayz Lab’s upcoming game Forsaken, which is coming to Kickstarter on September 6th!! Aside from Piers, Xota is the only other human main character that appears in Forsaken, but her tale is very different.

Imagine a planet full of the recently unemployed where the infrastructure has just begun to crumble. Uncertainty tanks the local value of otherwise-stable core world currencies, while simple necessities see a spike in demand. 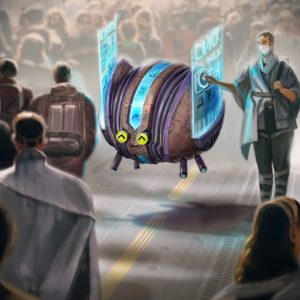 It was Xota’s dream come true.

Xota Xoran spent most of her life drifting through the Reach, seizing every fleeting opportunity she could on one world before moving on to the next. When she heard about the Empyriad’s departure from Thyrria, she found herself relocating again in pursuit of profit. 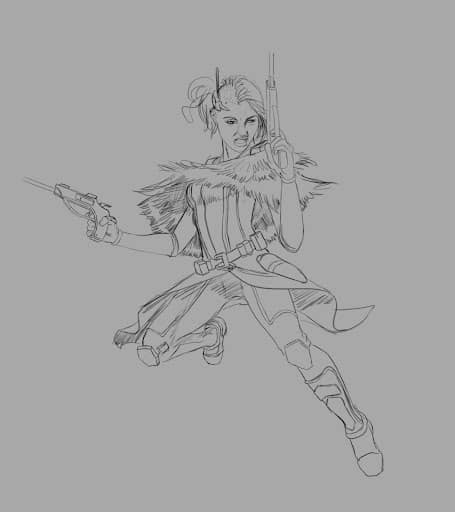 Fixers like Xota are a common sight outside the core, riding the murky

continuum of favors and services from planet to planet. Without the comforts and securities of the core worlds, people in the Reach are often forced to improvise and rely on each other. Fixers just make sure the right people get in touch with the right people, and make a neat profit in every transaction.

When Xota first arrived on Thyrria, she saw enough success that she really believed she’d found a new home. She made herself indispensable to every faction, and the connections she made between settlement communities gave them a real fighting chance against tall odds.

But three standard cycles later, it’s clear these people’s problems aren’t going away any time soon. This world is dying, and Xota doesn’t want to be around to see it happen. She stayed too long, almost put down roots, and now transport off world is exceedingly rare. For her to have a shot at getting off this rock, she’s going to need to call in every favor she can!

A fixer is only worth her reputation. If people see you as someone who gets things done, they’ll be more willing to pay it forward.

In play, Xota manages every part of her reputation–both with the factions, and her own personal notoriety. Her talent allows her to connect with the faction personas as a free action every turn, giving her a nudge when it comes to 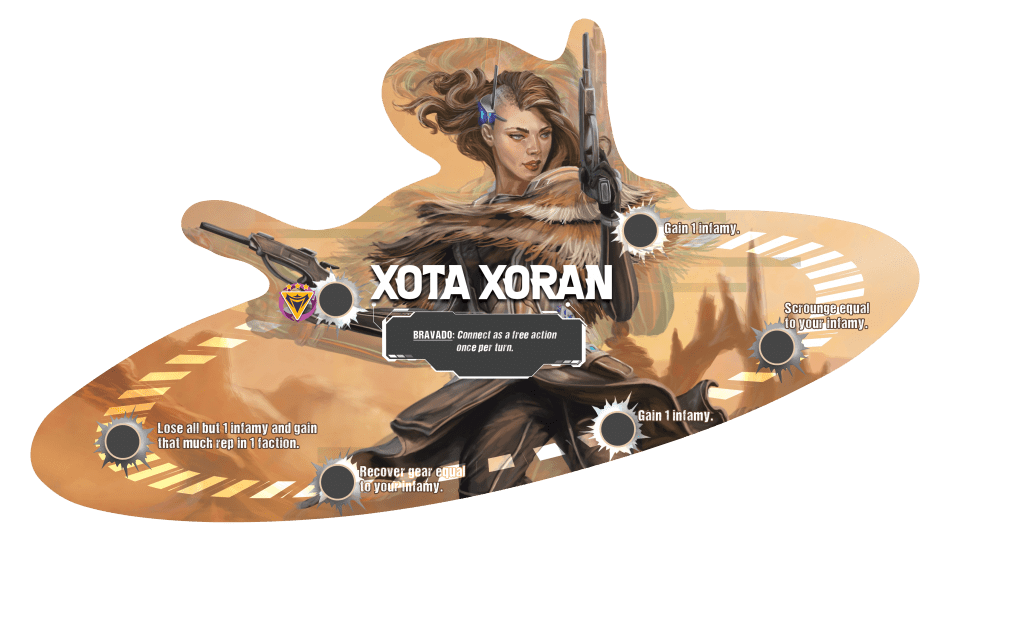 taking on new jobs and gaining faction bonuses. Additionally, her Jetpack gear card allows her to move to those points of contact expediently.

But Xota’s real power comes from managing her infamy. Infamy is a status card that you accumulate by making noteworthy–and often shady–choices in the narrative. The more you accumulate, the more of a target you become for your rivals.

For Xota, this infamy is an engine for getting things done. The abilities on her legend loop allow her to regulate and capitalize on her infamy, giving her access to free value with a very high ceiling… as long as she can stay alive that is!