Welcome to the seventh character spotlight, featuring Killquick Quipsallak from Game Trayz Lab’s upcoming game Forsaken, which is now LIVE on Kickstarter until September 29th! Our last character spotlight introduced us to Xota Xoran: a fixer looking to piece together enough favors to get her off of Thyrria and back among the stars where she belongs. In this week’s entry, we’ll meet Killquick Quipsallak, one of the characters only available through our “Prisoner and the Peon” expansion pack! 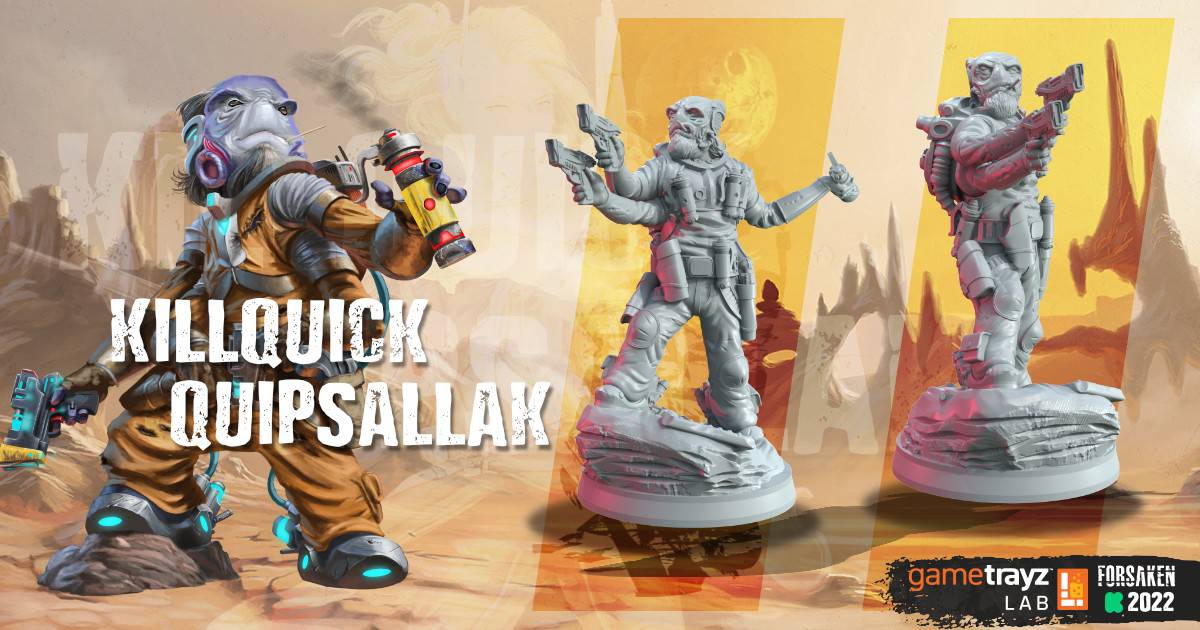 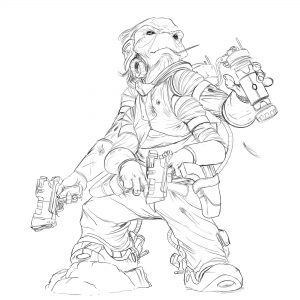 The Empyriad operates across thousands of systems, both among the core worlds and out along the reach. Its workforce numbers in the billions, but not every employee is… conventional.

Along with the Ebon Eye, the Grunks are one of several proprietary species engineered by the Empyriad for specific tasks. While the Ebon Eye was originally designed for risk management, the Grunks were designed for labor. Their genetics make them practically indestructible, able to endure all but the most harsh environments and regenerate from any injury. Additionally, every Grunk has been hard wired to love their work.

During the Empyriad’s time on Thyrria, Killquick was part of a drilling team on the Mycoid Verge. He decided he’d had enough work for one day, and brought down the entire mine on his head, crushing him beneath millions of kilograms of earth and stone. There he lay in peaceful darkness for more than 200 standard cycles.

When Killquick’s body was excavated by some idiot, Killquick was NOT very happy about it. His genetic markers compelled him to report for duty on a world where the Empyriad was nowhere to be found. Of course he would be the only one called in for a shift when everyone else got to go home!

But once he reported to his tasking hub, he learned something that could change every Grunk’s life forever… 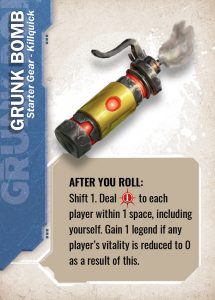 Killquick is short and scrappy, and he has the smallest vitality pool of any character. However, he couldn’t possibly care any less!

When Killquick is defeated, he draws a defeat card from his own special defeat deck. These defeat cards feature far softer penalties than normal, and often empower the irritable Killquick to take additional actions just out of spite!

Killquick’s entire kit is built around converting his vitality into value. His special starter gear, the Grunk Bomb, can be used to damage every character in his space–including himself–and gains extra bonuses if any player is defeated–also including himself! Meanwhile, Killquick’s legend loop makes the most of his vitality, allowing him to convert it into extra value.

Without ever needing to stop to rest or heal at the Clinic, Killquick has a natural advantage over other characters. Will you be able to leverage that into a victory?

Back us NOW on Kickstarter!

Forsaken is currently LIVE on Kickstarter! Our campaign ends on September 29th, 2022, and we’d love to have you join us. The “Prisoner and the Peon” expansion is available for a discounted price through the Kickstarter, and may be difficult to find after our campaign, so back now if you want to find out what happens during Killquick Quipsallak’s story!