Over 20 Story Arcs with over 70 Outcomes!

Before you begin a game of Forsaken, you choose your character and a story module to plug in. This story module represents a branching arc that will furnish you with objectives (called “feats”), and determine the impact you have on the world around you.

A sample feat card. “S” feat cards are your starters, and are drawn randomly at the start of each chapter. As you progress in your story, you’ll also receive more specific feats tailored to your narrative.

Every character has their own custom story arc tailored to them, and we recommend you play with these arcs in your first game. However, even though the arcs branch out and have multiple possible outcomes, playing with the same story every time for the same character would get pretty boring after a while, right? That’s why you can seamlessly unplug your character’s arc and plug in a class module… but we’ll talk more about that below!

Completing your story feats is a reliable way to gain victory points, and they’re designed in such a way that the objections are intersectional–meaning, they’re usually not something you have to focus 100% of your attention to complete. You can just do them on your way to doing other things.

But, you’re not forced to follow your story arc at all. You can just leave it alone, focus on other things in the game, and still have a perfectly reasonable chance at doing well! Your feats are there to give you exactly one handrail: enough to give you something to lean on if you need it, but not enough to keep you from living the life you want. 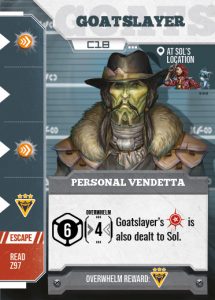 During Sol’s story, this stranger may show up in town as a result of your decisions, replacing the previous bounty! I wonder what happens to poor Sol if the Goatslayer reaches the end of its bounty track…?

As you complete your objectives, you will progress your story arc to its next chapter. This means referring to the encounter guide and reading a special entry called a vignette, which will describe the results of your efforts in the previous chapter, and often present you with a branching choice. The choices you make here will determine your next chapter (and your next set of feat objectives).

Every vignette will impact the game in a significant way, either by adding components or rules or introducing something weird. These vignettes are some of the most consistently impactful moments in the game!

Every new chapter introduces a new beat in the story arc, and also a new suite of feats. Completing all of the feats in your third chapter is one of the ways that the game can end…and completing a story arc in this way is a guaranteed way to read a finale story entry.

At the end of the game, you’ll check for all completed story arcs (there can be more than one!) and any “finale” cards in the event row from the world stories that reached the conclusion of their arcs. The encounter guide will give you a series of end game cut scenes, like a denouement, to show you what happened after the game as a result of players’ collective actions!

Click on the image below and zoom in to view a full spoiler breakdown of Sol Syrium Quell’s story arc, including all story cards, feats, game impact components added from the reserve, vignettes, and finale stories. 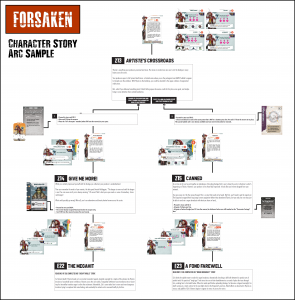 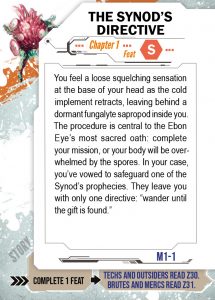 The first chapter story card of a class module. Any character can have this adventure!

The Forsaken base game includes a set of 6 class modules, and our bonus content revealed so far already includes a 7th! But…what does this mean?

The class module is an entire self-contained story arc that can be plugged in to any character. Your character’s asymmetrical gear and abilities stay the same, but the class module adds the following:

The result is, you can live an entirely different story path with any character. In fact, on the back of each character board is that character’s class: a merc, an outsider, a brute, or a technician. Your class determines the options that are available to you in your story arc, so that different characters can access different branches and special moments in every class module! While Grash might smash her way through the scenario, Mandorax may take a more thoughtful approach, and the stories absolutely reflect that.

Another interesting feature of the class modules is that their feats have a more general design, so that different characters will leverage their asymmetrical strengths to complete their goals in different ways!