Welcome to the eighth character spotlight, featuring Big Watta Bimphro from Game Trayz Lab’s upcoming game Forsaken, which is now LIVE on Kickstarter until September 29th! Our last character spotlight introduced us to Killquick Quipsallak: an indestructible laborer exhumed after hundreds of years underground, who struggles against his genetic imperative to report for work on a world where his employers left long ago. In this week’s entry, we’ll meet Big Watta Bimphro, our most-recently revealed stretch goal for the Forsaken kickstarter campaign! If you haven’t pulled the trigger yet, now is the time so you can help us include this wild new character in the game!

Space is a Big Place 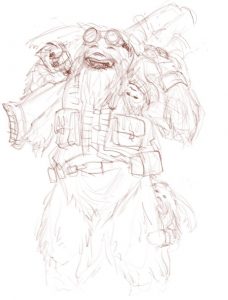 A sketch of Big Watta Bimphro, by concept artist and sculptor Bryce Cook.

This isn’t Star Trek or Star Wars. There’s no deus ex machina mode of transportation. Without any ways to break or circumvent the laws of physics, space travel in the world of Forsaken has to pay attention to things like inertia and gravity.

That’s not to say that there aren’t a few shortcuts. Sublight propulsion has been perfected over the course of thousands of civilizations, and a small number of wormhole corridors have been stabilized to allow safe passage.

But in a galaxy that’s more than 100,000 light years wide, space serves as a very real limitation. Known space is only a tiny sliver in the big picture, and even within that sliver it is impossible to travel across it all in a human lifetime.. Even with all the best tech and wormhole hopping, worlds like Thyrria are still two or more standard cycles away from major shipping lanes at full burn. All that fuel and time costs dearly, and that leaves most systems in the reach to fend for themselves.

The occasional space trucker may run longer hauls between nearby worlds, transporting unique commodities in rigs massive enough to make the trip worthwhile. One such space trucker is Big Watta Bimphro.

Hauling cargo has never been the safest line of work, but when Big Watta dusts down on Thyrria, her buyers cross the line. They render Big Watta unconscious with a toxin, take her two cubs–Lil Watta and Femryk–and leave her with a grim ultimatum: truck what they want, when they want it, if she ever hopes to see her kids again. 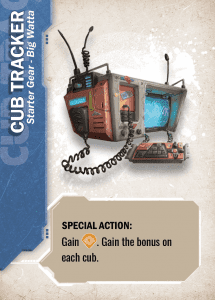 Enraged, Nurturing, and Everything In-Between

Lil Watta and Femryk each have their own “Cub card,” which has a lost and a found side. As long as a cub is missing (like at the start of Big Watta’s core story arc), their card is set to its lost side, which features a different set of effects.

Each side comes with its own advantages and disadvantages, and those are leveraged by the other elements in Big Watta’s kit–like her Cub Tracker, or certain spaces on her legend loop.

While the cubs are lost, Watta is extremely driven. She’ll often be moving extra fast, hitting extra hard, and tearing through anything that stands in her way.

While one or both cubs are at her side, she starts to play things more safely. Instead of recklessly going all out, she’ll be able to mitigate damage and random results, and protect herself and her family from anything that comes at them.

However you navigate your story arc determines the fate of your family, and the effects in your kit reflect that every step of the way!

Back us NOW on Kickstarter!

Forsaken is currently LIVE on Kickstarter! Our campaign ends on September 29th, 2022, and we’d love to have you join us. Big Watta is part of our Lab Limited bundle, available for FREE with any pledge of core box or higher during the campaign, so back now!